Failed Ferments and Why is This in Our Bedroom? 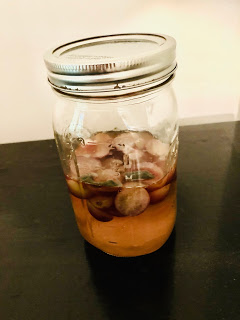 Fermentation is a little bit of a mystery to me.  I really like most fermented foods (as long as they’re not too spicy) but I don’t quite get the science behind it.  And something about the “mother” or “scoby” in the drinks still kinda grosses me out.  I’ve never had a burning desire to do my own fermenting.  I’ll get my sauerkraut and kombucha from the store and feel just fine about it, thank you very much.
But every now and then, The Chiropractor gets on a kick where he wants to do some fermenting.  I try to be supportive, but the truth is, he hasn’t quite got the process down.  He has had some good successes with cabbage and beets, and for a while we made kefir water successfully (that’s actually pretty easy once you get it going).  One Christmas I even bought him some special fermentation jars and lids (seriously, who gets stuff like that for Christmas?) because I knew he had an interest, but I’ve never been eager to jump into the process myself.
About 2 years ago he was doing beets for the first time.  He had his big jar stuffed with shredded beets and some probiotics and whatever else was in there to get the ferment going, then put the special lid on it.  Those fermentation lids have a valve system that lets pressure or moisture escape as the sugar gets eaten up (I think–please educate me if you know more about it!).
Now, if you’ve ever done anything with fresh beets you know they stain a deep red.
So one day, I’m sitting at home alone.  It’s very quiet and I become aware of a soft, steady, mysterious drip happening somewhere about every 15 or 20 seconds.  Not knowing what exactly the sound was I started searching and eventually found the source.  The big jar of beets had been placed on the dresser in the bedroom and had spilled through the valve during the fermentation process so that there was a steady drip of beet juice splashing onto the almost-white carpet.  Cool.
First off, why was this jar in our bedroom in the first place?  Second of all, how do you get beet juice out of carpet?  Thirdly, what the heck?!
Turns out that you’re supposed to keep fermenting foods in the dark where possible.  I guess(?) our bedroom was a better option than the kitchen counter.  Umm. So I cleaned up the mess and that evening The Chiropractor adjusted the jar and moved it into the bathtub (brilliant)! (And weird!) Over the next few days it made a mess that would have you wondering where the rest of the carnage was (again, the color of beets).  But crazy enough, it actually turned out, I was convinced to try it, and those fermented beets weren’t half bad.
He recently decided to try again and follow a new recipe.  Insistent that this wouldn’t leak because it’s the “starter,” he again put it on his bedroom dresser.  As of this writing, the picture below is currently sitting next to a framed picture of me I gave him when we were dating–how should that make me feel? And if it’s not obvious by looking, this fermentation project has gone bad.  That black/green fuzzy stuff isn’t supposed to be there.  I think he knows it’s no good but just hasn’t wanted to deal with it.  But I’m certainly not going to touch it so it will stay there until he does.  Or maybe I’ll throw a towel over it so I don’t have to look at it.  Good grief what is this coming to…?
So if you have any good tips on fermenting, please send them my way and I’ll gladly pass them along!
Also, this seemed like a good time to share this episode of Kid History.  If you’re not familiar with this series of kid re-enactments, you definitely need to be.  If you watch closely at 2:30 you’ll see a fun sketch on homemade kombucha fermenting in the pantry, and 5:30 is basically my response to the first 21 day detox Brandt started me on… Enjoy  🙂 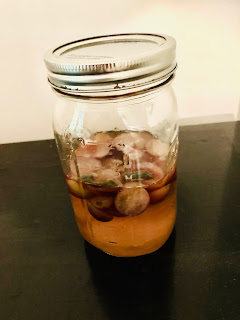