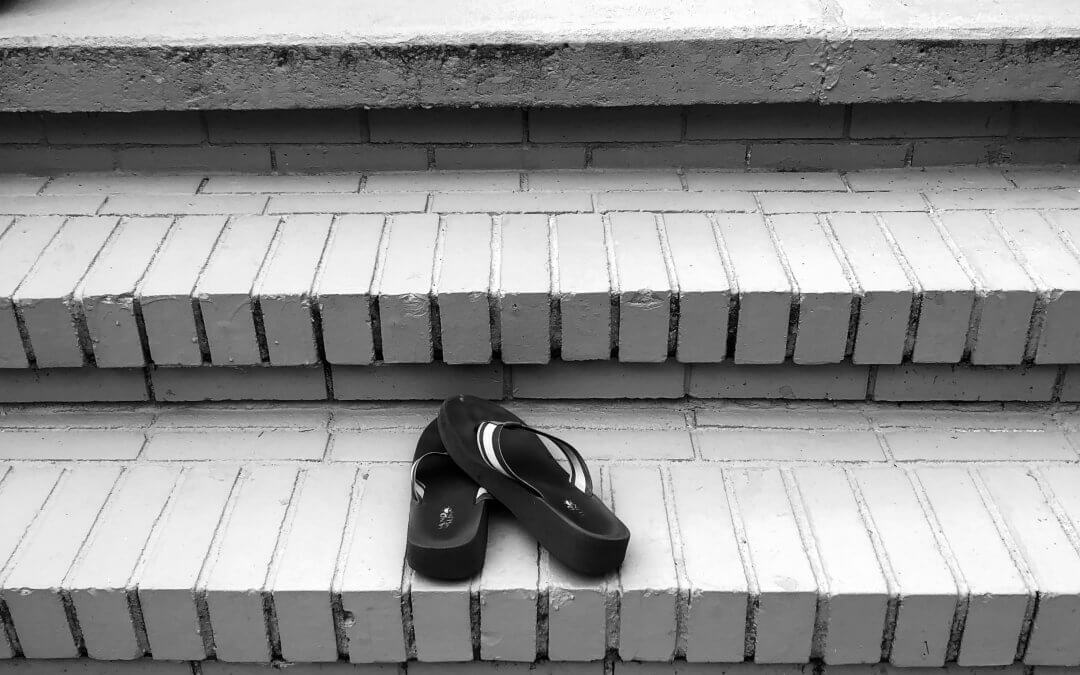 The Chiropractor’s Wife has been a little “needy” this summer…  After a couple of big bumps and bruises I’ve been very grateful for not only The Chiropractor’s skills and expertise in getting me fixed up, but also his patience with me as I sometimes want to do things the hard way in my healing journey.  :/

Incident #1 involved sliding down the 4 concrete steps on our back patio in the rain and landing on my tailbone in early June.  I had decided I wasn’t worried about getting wet and went out to check the mail–in flip flops.  I took the 4 or 5 steps across the patio to the stairs not thinking twice about the peril I was putting myself in, and then down, down, down I went.

As I lay on the ground at the foot of the stairs catching my breath and realizing what had just happened, I slowly moved all my extremities to rule out paralysis.  Yes, I was pretty sure I could move everything.  I wasn’t paralyzed.  Whew.  But my bum sure took a hit.

I couldn’t think of the last time I’d taken a tumble like that.

Oh wait–yes I could.  It was in 2008 and I was living in Fort Worth, TX.  I was coming down some steps in my apartment complex parking lot.  I was distracted by a new neighbor and Graceful Me stumbled down the stairs.  The result was a broken foot and 2 months on crutches and in a boot while still teaching elementary school music.  That was fun.  And my car was a manual transmission so I couldn’t drive myself anywhere. (Side note, this was right before The Chiropractor and I met for the first time.  We were actually both healing from a broken right foot when we met–I was still faithfully wearing my boot, he had ditched his early on).

Short tangent–That was also the spring when someone doused the roof of my apartment building in gasoline and started a fire in the apartment right across from me in the middle of the night.  Gasoline leaked through to my ceiling and I woke up in the middle of the night smelling the fumes, luckily before the fire started so I could get out.  So let’s just say it was already a stressful spring, and breaking my foot at that point was just the cherry on top…

And here’s the kicker–I was now wearing the same flip flops I’d had on that day.  Don’t ask me how they’ve lasted over 13 years, because I have no idea. I actually still wear them all the time despite their “betrayal” to me.  And yet, here I was, suffering another injury from the slickness of these shoes that have zero grip.  You think I would have learned my lesson after the first break.

Anyway, I had some good scrapes and bruising on my back and arms (still visible several weeks later), a fair amount of soreness for several days, and a killer headache the next day, but I could move, walk, and sit without searing pain.  But of course I wouldn’t let The Chiropractor do anything to me that first day, despite his willingness, just because I was so sore.  I was convinced him doing any kind of manipulation would be more than I could take.  (He once claimed that my auburn/slightly reddish hair color gave evidence to the claim that redheads “feel pain” more acutely, meaning: I have low pain tolerance…it’s okay, I own it…)

The Chiropractor was appropriately sympathetic to my injury but not overly worried about my recovery.  He was completely confident that I had not fractured anything because of how I was able to move and sit.  I wasn’t quite as convinced. I was bracing myself for a long and difficult recovery that including taking a donut pillow with me wherever I went and incorporating pain medicine into my daily regimen. And relentless replays in my mind of Steve Urkel’s voice saying I’ve fallen and I can’t get up…

I think it was also just a little more exciting to tell people “I think I may have broken my tailbone” than the more objective and accurate “I fell down my stairs because I made a bad footwear decision”  BUT (or should I say butt…) I also didn’t want to go into an urgent care to confirm such a dramatic claim. (Besides which, there’s not much that could be done about it anyway even if it were fractured).  Mostly I wanted to just complain about it but also expect my husband to fix me without having to touch me. I’m not sure how that could have been accomplished but still…  (See how his patience should be rewarded?!  He puts up with a lot…)

The next day I did ask him for an adjustment because of the headache, and then later in the day we came into the office after hours for some muscle stim treatment on my low back, both of which helped.  Go figure.  And the soreness got better after a couple of days and a few more adjustments.  Weird.

Once again, a testament that (depending on the situation of course) chiropractic care can be so much quicker, easier, affordable, and more effective than whatever alternative we may simply pursue out of habit/past experience.  I could have racked up a hefty bill and spent hours being seen in urgent care, and they likely would have x-rayed me, shown me that I hadn’t broken anything, and prescribed some muscle relaxers and/or pain meds.  And over time I would have healed just fine. But luckily my racing worst-case scenario mind reigned itself in before I spent the weekend seeking expensive and minimally effective treatment from strangers, when I had a skilled practitioner (who gives me pretty good discounts) at my disposal.

After 5+ years as The Chiropractor’s Wife, you’d think I’d have all this down.  But obviously I’m still learning and I think I can be his most challenging patient at times…  😀

Oh and by the way, my other big blow was during a whitewater rafting trip about a week and a half later at church camp with the youth when our raft was lodged in some big rocks on a class 4 rapid and another 8-person raft came right at us.  Instead of dislodging us, the other raft ended up slamming right over the top of us and my head was in prime position to get quite a blow.  Again, it took me a minute to assess whether or not I had just become paralyzed and was still breathing.  That was semi-early in the river, and for the rest of the trip I was frozen in adrenaline, expecting a life-threatening mishap and grabbing the “chicken rope” at the slightest possibility of trouble. I think my muscle soreness the next day had much more to do with the adrenaline coursing through my muscles for almost 2 hours than the actual hits we took.

But again, I found myself with a pretty bad headache the next day.  I had The Chiropractor do his thing to my neck and magically felt a ton better.  He sure comes in handy.

So what are the lessons I’m still working on learning?  For one, don’t wear flip flops in the rain, especially ones that have landed you on your backside in the past.  For two, stop the drama in your head and let your husband help you.  Gee whiz.