My First Over-Nighter in a Hammock 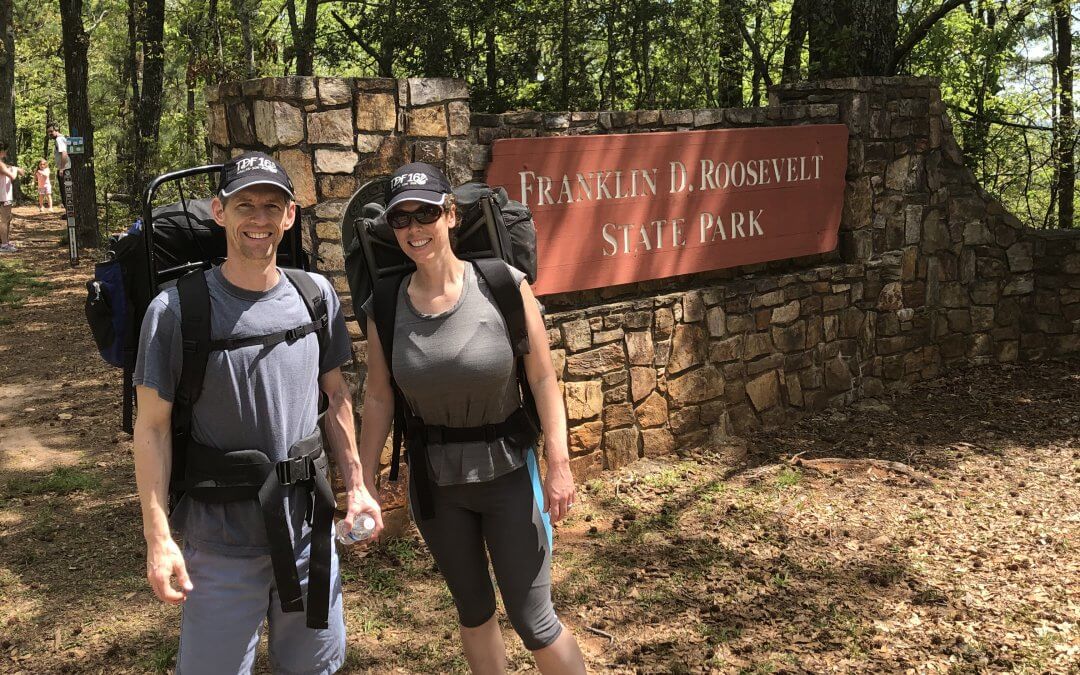 When we suddenly found ourselves with regular 3 day weekends (thanks to the excitement of 2020), we made it a priority to get out into nature more.  The state of Georgia has an elaborate state park system and we’ve been on a mini-crusade to see as much of it as we can.
I’ve always enjoyed camping. I didn’t do a whole lot of it when I was single because I didn’t have my own equipment, but some generous friends and family helped outfit us with camping gear when we got married.  Now, when the weather is good and the weekend is open, we try to get out for camping trips as much as we can.
I should edit my earlier statement to:  I’ve always enjoyed camping when you can drive up to your campsite and stash everything in your car.  Outside of those parameters, I went on one overnight hike at a church girls camp when I was 15 or so, but the adults arranged the food, tents, and everything else–all I had to do was walk with my backpack and water bottle, and learn how to make my own latrine.  (That’s enough for a 15 year old girl I say.)
Despite my fascination with the Appalachian Trail (thanks to my mom for that), I’d never done a full-blown overnighter.  I mean, the kind where all you have access to for a day or longer is what you carry on your back.  I have done lots of camping trips where we pack the car to the brim with all our “necessities,” but I’ve always enjoyed that luxury of the car.  Until this year.  Now I can check “survive in the wilderness for (close to) 24 hours” off my list.
No running water (not even an outhouse), no cooler filled with chilled drinks, no air mattress, no escape from the bugs.  Just us, some bulky packs on our backs, and nature.
We happened to have perfect weather the weekend we did this, which was very fortuitous.  We went down to FDR State Park at Pine Mountain, where there is a hiking trail that extends for about 22 miles.  The Chiropractor has said multiple times he wants to do the whole trail in one day, but I haven’t shared that ambition.  He’s committed enough to the idea though, that he studied the maps and figured out a way we could hike about 2 miles in to our back country campsite, then we’d set up camp and he would continue solo down the trail another 11 miles.  I would relax in the hammock for a while 😊then walk back the 2 miles to get the car and go pick him up in a different part of the park when he was done a couple hours later.  And because there was a closer parking lot to our campsite than where we got on the trail originally, we could park there afterward, and it was then less than half a mile back to the campsite from that direction.  It was still only covering half the entire trail for him, but it made him content.
I was a little skeptical of this plan actually working out the way he envisioned, but decided it was time to get out of my comfort zone and do something I’d never done before.
I had mentioned a few weeks earlier to a friend from church that we were joking about shutting down the practice and just getting on the Appalachian Trail for a week due to the COVID shut-downs (luckily his office wasn’t forced to close but of course the patient numbers were way down).  The next thing I know she brought over some frame backpacks that I think she was already trying to get rid of.  So, no excuse that we didn’t have what we needed!
We borrowed a second hammock from some other friends because, even though we’re madly in love, sharing a hammock over night in the woods just wasn’t going to work.
Overall, it was actually a really fun weekend.  I did get a bunch of bug bites but #georgia.  I have to say my favorite part of the trip was as we were settling in to our hammocks.  I got right in and was getting cozy with my blanket while The Chiropractor was apparently struggling with his hammock.  I looked over right in time to see his swinging hammock flip him onto the ground.  😂  If you know us, you know that he’s the one with the good balance, crazy flexibility and impressive physical agility.  He’s basically a ninja.  And I’m definitely not.  So it was slightly gratifying to watch him fall out of his hammock as I was perfectly stable.  🙂
Anyway, what does this outing have to do with chiropractic?  If you’ve ever spent the night in a hammock, you know!  They’re extremely lightweight and convenient, but we were both pretty stiff the next morning.  First thing I did when we goth home was ask for an adjustment!
But even though I was a bit sore, I told The Chiropractor that I think I could do it–spend a week on the Appalachian Trail that is.  If the weather was perfect.  And he carried all the food.  And if there was a way to convert a hammock into an adjusting table…
Here are a few tips from my vast experience if you’re considering an overnighter in the woods:
1) If you kick your shoes off after you’re in the hammock, make sure they’re close and easy to slide into so that when you need to get up and use the “bathroom” in the middle of the night you’re not stepping around barefoot on rocks, twigs, snakes, or whatever else could be hanging out near your hammock. 😬
2) Keep a well-stocked cooler in your car for the trip home.
3) Schedule your chiropractic adjustment for the day you get back. 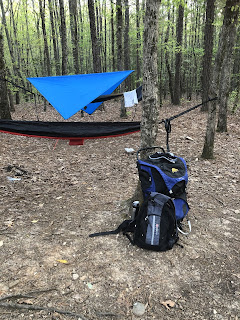 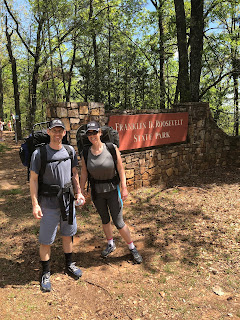