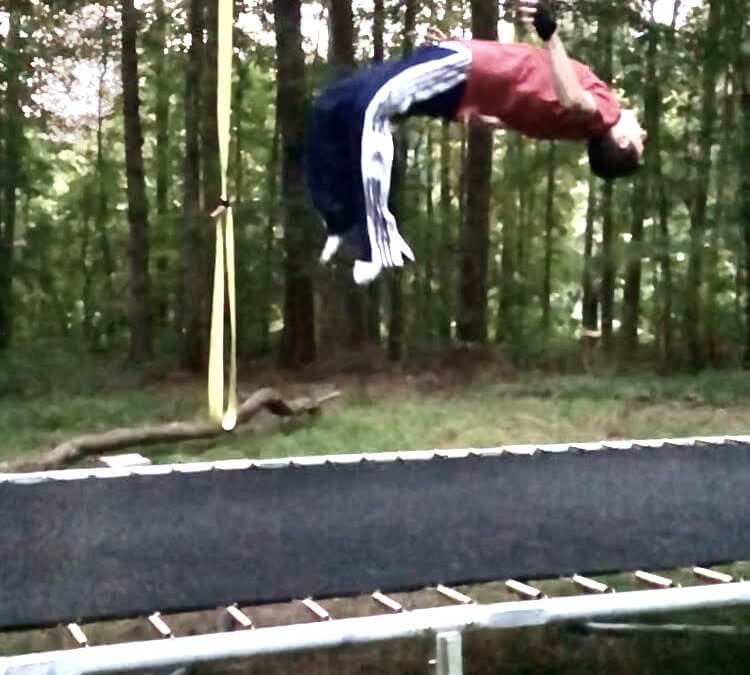 Have you heard it said that chiropractors and/or orthopedic docs discourage the use of trampolines due to the frequency of related injuries?  Or if anything, that they encourage a trampoline that has an enclosed net?  In theory this decreases the likelihood of having to set a displaced shoulder or fractured elbow or any other possible tramp-related injury. I don’t know where, but I know I’ve heard that said.  And as someone who works frequently in the pediatric rehab setting, where patients have suffered all sorts of traumas, usually much worse than a trampoline fall, that makes sense to me.

I DO know that I have NOT heard that said by my chiropractor husband.  He actually is a bit of a trampoline ninja.  A couple of years ago a family from church was getting rid of their open, rectangular trampoline in preparation for a move and I jumped on it (figuratively), knowing The Chiropractor would be all in.  When I told him about it that evening and how we were committed to picking it up, he was a little hesitant UNTIL he learned that it did NOT have a net, and that it was a large rectangular shape.  Then he got really excited.

He grew up with a similar trampoline.  And he got really good at moving his body through the air and controlling his momentum while flipping, flopping, flying, whatever.  You name it, and if it’s a tramp trick, I’d betcha $20 he can do it.

Now, he also grew up in a family that had 10 kids.  Natural consequences, street smarts, and boy scouts taught him a lot of what he knows (his parents are fantastic–don’t think otherwise!)  But I’ll just say this–he’s never been one to read a warning sign and then change his intended course of action when it comes to his environment or activities.  You just figure stuff out as you go and make it work one way or another.  And worrying about possible outcomes that are highly unlikely is not very far up on his list of priorities when it comes to options for his personal recreation.  (I should emphasize here that this is not the approach he has to healthcare!)

He learned how to move his body by moving his body.  On a trampoline without a net.  Because he didn’t have the perceived safety of the net, he had to develop a sense of spatial awareness that has continued to serve him well. And now that he’s a few decades into life he can still do all the tricks, and he’s the one that will be able to stretch or reach or contort in some crazy way to perform whatever task is at hand that most of us would give up on.

But whether you’ve got a net or not, if you’ve got access to a trampoline and use it on occasion, you’re one step ahead of the don’t-get-stiff-as-you-age game.  I’m not nearly as physically able or agile as he is, but I have to consent that even a few minutes of jumping on the tramp at the end of a long day can energize you.

And if you jump consistently, maybe when you’re in your 40s and ask your wife for a birthday party at the trampoline park, you’ll be the coolest kid out there.