Why Everyone Needs a Chiro in the Family The first time I went to a chiropractor (many years before I met Brandt), I was 23 and had been having chronic headaches.  I took ibuprofen all the time.  I’d also tried prescription muscle relaxers after they were suggested by a doctor.  I’d just returned from a year and a half of  missionary service away from home and had a very short window of time before I went back to college.  We had a family friend that had changed careers to pursue chiropractic and was in practice locally.  My siblings and I hadn’t had any exposure to chiropractic growing up, but my mom decided to get me in to see him in case it might help.  He did an x-ray and confirmed that I likely was still feeling the impact of a bad car accident I was in when I was 17. He adjusted me and I went home with a pamphlet on Forward Head Posture. Then I returned to school out of state.

Headaches continued frequently throughout college, but ongoing chiropractic care didn’t really occur to me as an option, and even if it had it certainly wasn’t in the budget.  When I moved to Fort Worth to teach elementary school music, it became part of my routine to be home in time for a nap from 4-5.  I loved my work but was more often than not fighting a dull headache and fatigue at the same time.  I hadn’t pursued any further chiropractic treatment since the one visit a couple year earlier.

When I started dating The Chiropractor in 2009, he didn’t have any credentials behind his name to assure me I could trust him with my neck.  (I mean, that’s kinda an important body component right?!) However he did some really effective stretches that helped, and since his brother Ryan, who was also in chiropractic school, was a little further down the road with his schooling and already working in the clinic, it seemed reasonable to let him work on me.  So I did.  He cracked and popped me left and right while Brandt stood by and excitedly said weird stuff like “Yeah, get that occiput” or “Ooh, did you hear that anterior?”  Whatever, chiro lingo…

Side note: Chiropractic students are eager to test out all their new skills and no doubt part of that is because they need the practice.  I don’t necessarily recommend a beginning chiropractic student if you’re already nervous about your first adjustment only because they’ll likely be so focused on what they’re doing that they might not be the best at putting you at ease.  But Ryan really was a good adjuster (Brandt was/is too, I just hadn’t given him a chance yet!)

I eventually let The Chiropractor start adjusting me.  But then our relationship took a little hiatus that lasted a couple of years.  During that period, I did see one chiropractor when I was really trying to get on top of my headaches (by this time I had insurance that kicked in a little).  The chiropractor I saw was a great clinician–my posture got a ton better and it was helping the headaches–but he was a little aggressive and kinda made me feel bad if I couldn’t come in multiple times a week and commit to an extensive (and expensive) treatment plan.  I stopped going after about a month.  (Anyone else had a similar experience?  Blegh.)

When Brandt came back on the scene and we started dating again, I started realizing how nice it was to have someone on hand who could help me not only with the headaches but with muscle stretching, joint issues and nutrition.  And he didn’t even make me pay!  Of course there were many other and more important reasons I fell in love with him, but this particular skill set certainly didn’t hurt! 🙂

Now we have an adjusting table at home and whenever I’ve got a kink or an ache or pain he fixes me up right away.  Sometimes he folds me up into the most awkward position and jumps on my side (that’s the anterior adjustment I think?) and I think I’ve finally gotten used to it…  Sometimes he really has to put some umph into his adjustment because even though I’ve been adjusted hundreds of times now and trust him completely, I sometimes still tend to guard, and that doesn’t help any adjustment (sorry ‘bout that honey—I’m trying)!

But there are also times when not everything releases, and times when I  have unreasonable expectations.  Because I like to think my husband is basically a Superman and can fix every last possible complaint about my aching body all at once and immediately (often, my requests are accompanied with other jumbled thoughts like “I’m glad you’re home/the lawnmower won’t start/we really need to get our taxes done/what are our plans for this weekend/I think we can get a better deal on our insurance/and can you fix my shoulder right this second?”), discovering this was a little bit of a lesson for me.  Like everything good, lasting and ongoing improvement takes some effort and consistency with the small things.  So I’m getting better at doing my stretches and exercises.  Sometimes. Other times I still expect him to fix me regardless…

So, is being married to a chiropractor everything it’s “cracked up” to be? 🤣  Yes, yes, and yes. Are there aspects of being married to someone who owns their own business that make me a little crazy? Yes to that too. Do I hope that I would have embraced chiropractic if Brandt hadn’t come back into my life? Absolutely!

Of course, I’m biased.  And clearly, I’m ridiculously blessed to have this guy around.  But I honestly hope that, even if I didn’t have the perk of having someone who can give an adjustment on a picnic table at the park or on a bench at an airport during a layover, I would still be in camp chiropractic.  Because it really helps, go figure… 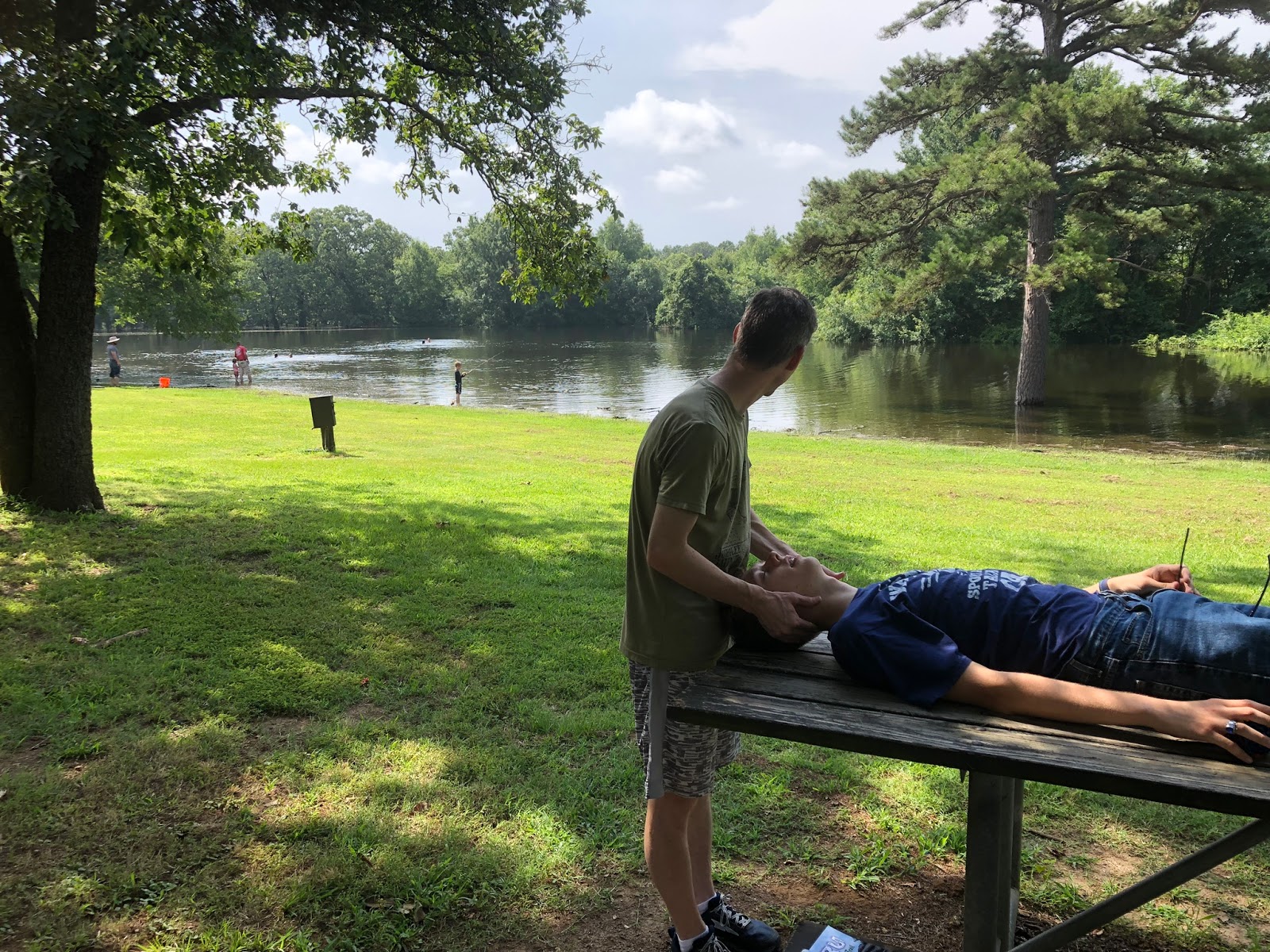